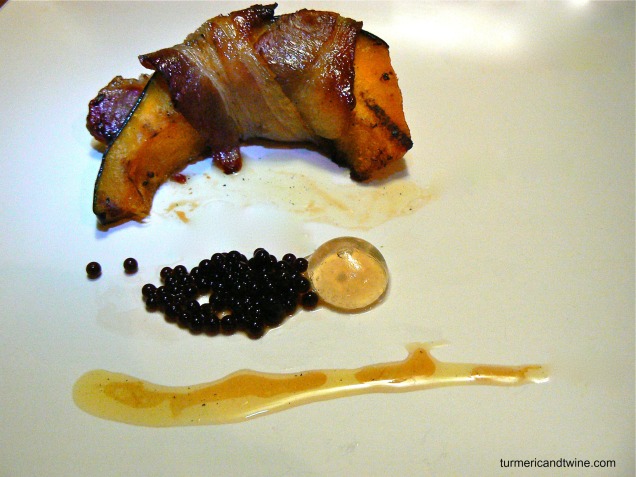 I’m slightly concerned about my post titles being a bit too long. I can admit that they’re all a mouth full… and somehow, they manage to keep growing. To me, this isn’t exactly a problem as I think naming a dish according to the ingredients it contains gives my readers a clear idea of what the post (and recipe) is about.  I like to list the ingredients I feel are important to each dish, but since my recipe interests include things like flavour pairing and molecular gastronomy, I tend to think ALL of the ingredients are important. Woops. Predicament.

It’s also due to my own personal inability (or laziness) to come up with a catchy title. It’s clearly too challenging for me to plan a dish, make it, photograph it, write about it AND create a catchy title. That’s just taking it too far. Anyway, I personally like to see literal titles. Let the food speak for itself. Most people can look at the ingredients (if they’re relatively familiar with them) in a recipe and get a sense of whether or not they’ll like it. Right? The names and imagined flavours swirl around in your mind, forcing the idea of the dish into your mouth. I appreciate the honesty of a literal title… but again, there’s the whole length issue. What do you think? Let me know what sort of title catches your eye.

OK, so it turns out that this recipe is ridiculous. Utterly ridiculous in the best way. Nathan and Alex came to visit me some time ago. Just as passionate lovers never leave the bedroom, my foodie friends and I never left the kitchen over the three days they were around. Fevered moments of flavour creativity (some might say delirium) and collaboration were plentiful and virtuous food was abundant.  The guys brought with them a gorgeous array of fresh farmer’s market produce. Most important of this haul was bacon. Locally butchered, farm fresh strips of fatty delight. It created a revolution in my home and became part of almost every meal.

While we played around with my molecular gastronomy kits, futzing with spheres and such, Nathan remembered once again that we had bacon. How he could’ve forgotten, I’m not sure. I certainly hadn’t stopped thinking about it. Luckily, he took that thought one step further and remembered the acorn squash he’d brought. It came to everyone’s attention that wrapping bacon around grilled acorn squash would be painfully good. I’m still in pain now. Oy vay.

First, we blanched our cut slices of squash in boiling water for 3 minutes (only 4 at a time so the water doesn’t cool). 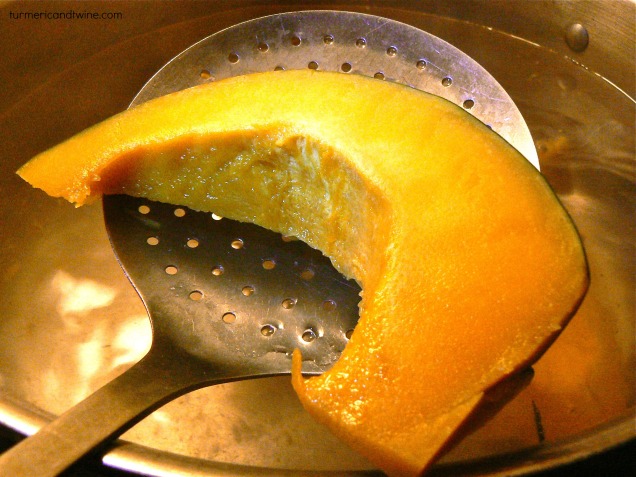 Next, we grilled those beauties on a stove-top grill (pan frying is totally acceptable). Luckily, there was some bacon fat left on the grill which added extra flavour to the squash.

Now that our squash had those beautiful grill marks, we wrapped them (so hard) in bacon and baked them. Sadly, I must note that we had run out of bacon by that point, so not every piece of squash was wrapped.

I showed the boys how to make molecular balsamic caviar, which happily features in this dish.

Maple spheres are also featured. And just look at that little guy! Beautiful, isn’t it?

Of all the maple spheres we made (about 8) this one was the only sphere presentable enough for a photo. When making spheres, it is important that your ingredients have a certain level of calcium in them for the thin film to form properly. Apparently, maple syrup is lacking in the calcium department and the film did not form well. They kept sticking and breaking when I tried to move them. In the hopes of getting one or two out of it, I left some in the sodium alginate bath for a long time (about 15 minutes), which paid off. If I were to try making them again, I’d add some yogurt to the mixture to avoid the same problem.

Boil a large pot of water. Place 3-4 pieces of squash in the water. Blanch them for 3 minutes then remove them from heat. Repeat until all pieces are blanched.

Grill or pan fry the squash on high heat until the surfaces are beautifully brown.

Place bacon wrapped squash in a casserole pan and bake for 25-30 minutes.

Eat and be amazed.

Thanks guys! It was fun!