Most children have difficulty eating very sharp and hot flavours. There are some foods and flavours that I remember despising when I was very young and later grew to enjoy, such as cilantro, arugula and mustard. I never had that problem with ginger. Though I could only handle it in small doses when I was child, ginger has always had a special place in my heart.

Ginger root belongs to the Zingiberaceae family and is closely related to turmeric, cardamom and galangal. It was first cultivated in parts of Southern China and is now used in cuisines around the world. It is quintessential to Chinese, Korean, Japanese and Southeast Asian cuisine and also shows up in many Caribbean dishes. From kimchi and curry to ginger beer, tea and cookies, ginger makes all kind of appearances in your cup, bowl and plate. 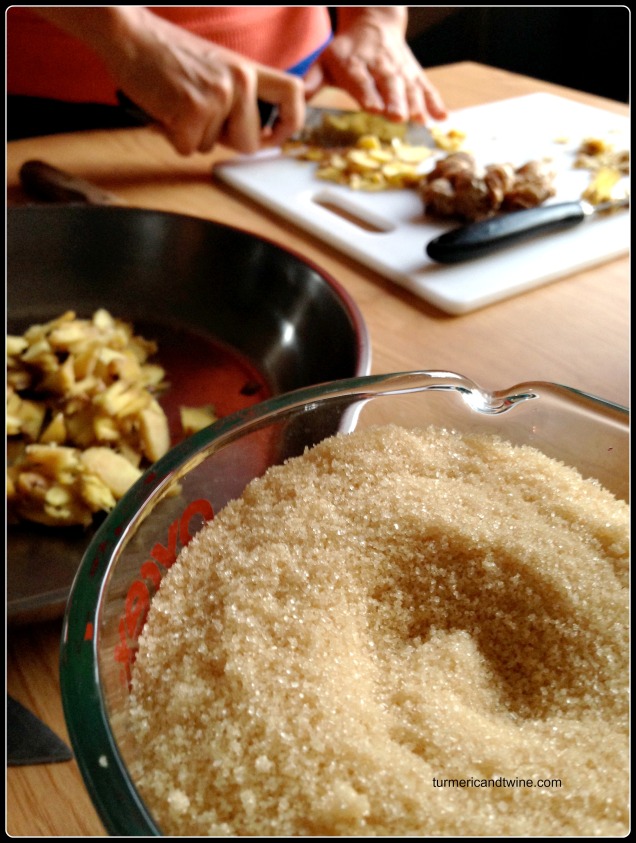 Ginger is also a boss in the medicinal foods category. It can be used to suppress nausea, has been proven to have hepatoprotective qualities and has even been promoted by the American Cancer Society as treatment to keep tumors from developing.

Hot and spicy in flavour and aroma, ginger can overwhelm a gentile or unfamiliar user, but it is certainly worth pushing through the burn for flavour like that. Ginger adds so much to any meal.

Since ginger knows how to bring the goods to the table so hard, it is Candied Ginger Week here at Turmeric and Twine. I’ll be featuring sweet uses of the spicy rhizome. Every week should be ginger week.

Ginger syrup and candied ginger can, luckily, be made at the same time. It is extremely easy and satisfying to make.

Ginger root can be found in varying degrees of dirtiness. In Korea, sellers make no attempt to clean the dirt off their roots, so mine was really filthy. Scrub the outside very well or you will find your syrup has an unwanted earthy flavour. Peel only if absolutely necessary.

Cut ginger about 1/8 inch slices. Then roughly chop in small pieces. The smaller the pieces are, the more flavour will be extracted.

Place ginger, sugar, salt and water into a non-reactive skillet (non-stick or stainless steel work best) and heat to a boil. Reduce heat to a simmer and cook for about an hour or until the liquid is thick and syrupy.

Pour the syrup and ginger pieces into a jar, cover and refrigerate for 3-4 days. This simultaneously infuses the syrup with more flavour and candies the ginger pieces.

To separate the syrup from the candied pieces, simply strain in a stainless steel strainer. Candied ginger can be refrigerated for up to a month and frozen for several months. Use them to get fancy with baked goods or nibble on their own (like I enjoy). 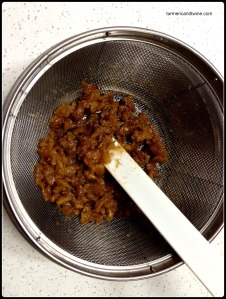 Strain the syrup further with a fine mesh strainer so there is no fibrous material left. Drizzle on ice cream, use as a cocktail mixer or make spritzers. Ginger syrup keeps very well and can be refrigerated for 3-4 months.

Makes a great gift if you divide in small jars.