On a completely unrelated note, here are a few photos my friend Dilwara and I took not too long ago. The moon was full and we were drawn out into the frigid night air to gawk at the blanket of night she covered the land with. With long exposures and fast moving clouds, the results were, as you can see, orgasmicly gorgeous.

I was asked to make a gluten free cake for an event I was cooking for at The Abode this past Fall. I was given a choice between making carrot cake or frosted banana bread. I completely despise everything about bananas, so it was sort of a non-choice, really. My distain for bananas goes so deep; it’s practically become part of my identity. Habiba: The Girl Who Hates Bananas. My young Korean students were always so confused that anyone would not like bananas, it became one of the class jokes. My mum told me that as a child, I cried if someone offered them to me. Sometimes I tear up in horror a little bit still. 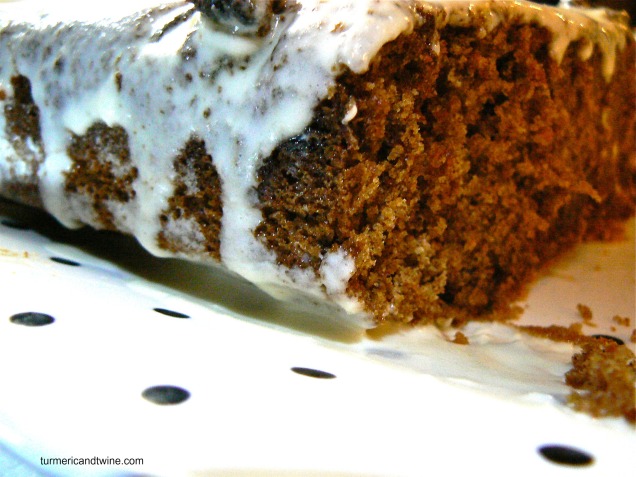 Banana lovers are very sneaky with their yellow torture devices and more than once I’ve been traumatized by the ill placement of said fruit. Banana haters can expect to have to double-check the ingredients of a smoothie, cookie or sweet cake, and even though it’s disappointing, it’s not horrifyingly shocking. But, when eating a vegetable stir-fry, pizza or chicken enchilada, one shouldn’t have to be on guard for bananas! I have had the misfortune of experiencing each of these normally fine dishes with the addition of bananas, rendering them useless. I am exceptionally good at detecting even the smallest amount of banana, which promptly ruins whatever food I am eating. If I could pass a ban, I would. 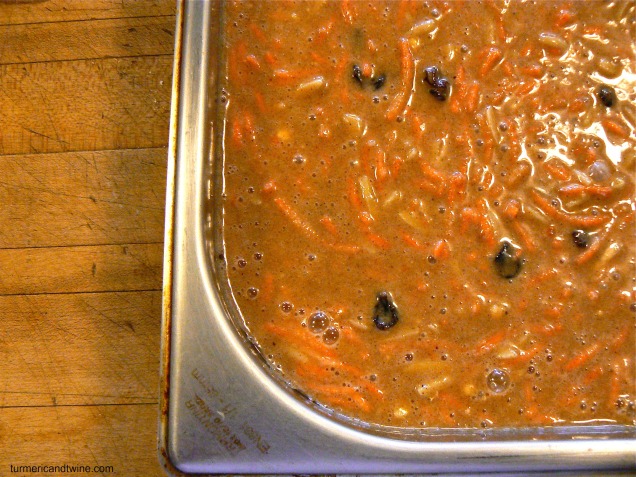 I made a carrot cake (banana free!) with maple cream cheese icing. It was a gorgeous texture, not too dense, and full of flavour.

I’m very skeptical with gluten free foods (probably because of the early attempts of gluten free enthusiasts to recreate comfort foods and ending up with a mouthful of something chalky, hard and tasteless) but I was very pleased with the flour I used. Bob’s Red Mill Gluten Free Flour uses garbanzo bean flour as its base. Sounds like you’ll end up with a cake that tastes like falafel, but I didn’t detect a thing.

In a bowl, mix flour, baking soda, salt, cinnamon, nutmeg and ginger together.

In a separate bowl, whisk sugar and oil until smooth. Then, whisk in eggs one at a time.

Slowly stir the dry mixture into the egg mixture. Stir until smooth.

Stir in carrots, nuts and raisins.

Pour the batter into a greased pan and bake for about 30-40 minutes. To check if the cake is fully cooked, poke it in the center with a fork or skewer. If it comes out clean, it is finished.

Let the cake cool. To remove the cake from the pan, use a knife to scrape the edges and ensure it is not attached. Put a plate or tray on top of the cake and flip them together. Ice that bad boy.

Yes: chocolate. And since you ask, yes: beets.

It was in Niki Segnit’s The Flavour Thesaurus (one of my food bibles) where I first heard of chocolate and beetroot being paired. I think my head exploded a tiny bit when I saw the two foods listed side by side. Once I’d gotten over my initial shock of the idea, I found it made perfect sense to combine these two flavours (and textures, I might add). To my surprise, Segnit’s critique of the pair was rather negative. She wrote that it tasted like “a cheap chocolate cake that’s been dropped in a flowerbed”. No matter. Nothing could deter me from trying it. I was hooked.

In fact, Segnit’s comments only fascinated me more. I wanted to start a chocolate and beetroot movement. Somehow I felt I had a duty to get the word out, because certainly no one else had the thought of making this sort of thing before…right? A quick web search proved me wrong and revealed that chocolate and beetroot cakes are everywhere. And in all sorts of forms: molten lava cakes, sweet breads, brownies and cupcakes. They looked good and the bakers/reviewers/eaters couldn’t stop raving about how gorgeously the two complemented each other. I felt the need to catch up with these baked goods. The challenge was on. ON!

Based on their individual flavour merits, beets and chocolate are meant for each other in cake form (or a gorgeous liquid nitrogen ice cream. Anyone?).  Here are a few reasons why:

Beetroot: Beets are unique for their sweet and earthy character. These qualities together have a tendency to turn people off. As a beet advocate, I find it tragic when people decide they don’t like beets based on one or two poor experiences. Like the time they tried plain boiled beets (or worse… canned beets!) or were the victim of someone’s boring, mushy cooking. The genius in the complexity and tones of beets is how they accent and respond to other flavours; sour, salty, herby and in the case of this recipe, sweet. The beetroot not only compliments the chocolate in flavour, it also makes the cake incredibly moist and light while still providing that rich chocolaty experience we all want when eating cake. Yum, yes and yeah.

Chocolate: Chocolate has a wide variety of flavour due to the multitude of processing it undergoes. Cocoa beans, fresh off the tree, are bitter, astringent and pretty much horrible. Once processed, chocolate falls into the roasted flavour category. Left unsweetened, chocolate is still quite bitter, but the roasting process introduces a rich nuttiness that responds incredibly well to sweeter flavours. I like to think of cocoa powder as a black canvas ready for lightening, and since it’s sort of a black hole of roasted goodness, it is very forgiving and accepting. Chocolate regularly opens its loving arms to coffee, mint, fruit, nuts and chilies. I found no reason that beets shouldn’t also be a part of that following.

Did chocolate beetroot cake disappoint? No, it’s only surged my expectations higher. There were no flowerbeds in my kitchen that day.

Peel and quarter the beets. Boil for about 30 minutes. Blend the beets in a food processor (I left a few small chunks unblended for a pleasingly colourful effect).

In a large bowl mix cocoa, tea and butter together until smooth. When it mixed well, add egg yolks and the blended beets.

In a separate bowl mix the flour, baking powder and salt.

In yet a third large bowl whip the egg whites until stiff. Gently fold in sugar until it combines with the egg whites. Then fold in the chocolate/beet mixture. Once combined, fold in the dry mixture until smooth.

Pour into a greased pan and bake for 30-40 minutes. Test your cake by poking it with a fork. If it comes out clean, your cake is done.

While the cake is baking, combine your icing ingredients in a food processor and blend until smooth. Add more cream cheese to achieve a thicker consistency. Add more yogurt to achieve a runnier icing. Let your icing set in the fridge.

Let your cake cool. Then ice it. Then drool over what you just made.