I love food. I love to think about it, I love to make it. I love to eat it. I love the way it feels, smells and tastes. I will eat just about anything. Really… maybe.

In a recent conversation with one of my elementary classes, my students and I got on the subject of bizarre foods. We disclosed our weirdest bites to each other, almost as if they were secrets. Being in Korea, home of many super fermented foods such as kimchi and cheonggukjang (stinky fermented soybeans), as well as stews that include dog meat (good for man) and snacks that include silk worm larva, many of my students had a rather different idea of what foods should be considered bizarre than I did. When I told them I’d eaten live octopus (this one got the most squeals when I told people back home), they were all like “Oh yeah…. Sure. No biggie, teacher”, but when I told them about the scorpion lollipop I got from a classic American joke/candy shop, they gasped and screamed. Nonetheless, we giggled, squirmed and gasped as the lists flew out. 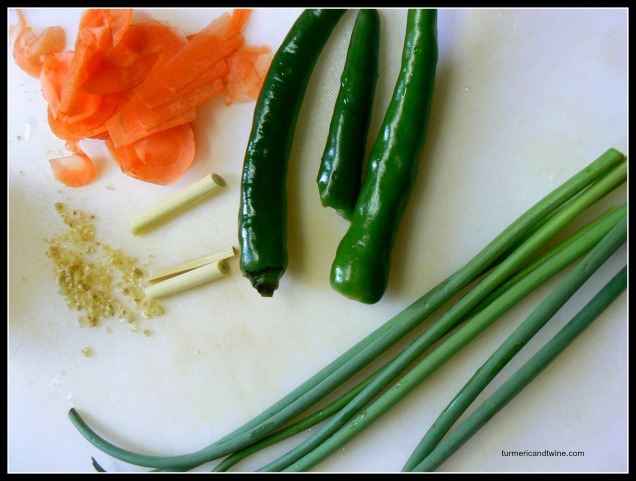 Many years ago, I feared food. I used to squirm at the thought of consuming anything I considered un-pure or unhealthy. For over a year, I put severe restrictions on my diet and basically only ate uncooked vegetables, fruits, nuts and seeds, which is a rather expensive and time-consuming lifestyle. I had to put several hours each day into planning, acquiring and preparing my meals.

Carrots are one of the cheapest, easiest vegetables to acquire and I happen to be a big fan of those friendly, orange roots. I kind of lived off of them for a while, not really considering the consequences that might lurk in The Dark Side of Raw Foods. Due to the massive overdose of beta-carotene my body was receiving and the lack of starches to soak up the excess, my skin turned an extremely disturbing orange colour. I’m pretty sure I burned all the photos taken of me during my hairy hippie phase, so I have no orange hue to show you. Unfortunate… it was impressive.

I might also add, that I had The Worst Gas Possible when I was eating raw foods. Even though it was over a decade ago, I still feel bad for the girl I drove cross-country with. I’m sure she felt like she was riding with a camel. Looking back on that time, I squirm so much more about orange skin and bad gas than tossing back a bit of snake soup, frog sashimi or random bug. I still love carrots, though. We have been through too much to let go of our relationship because of a skin tone set back. It was a little rude of them, but I let it go.

The Chutney family is a rowdy group of condiments that hails from South India. They usually contain some mixture of spice(s), vegetable(s), and/or fruit(s) and there are many varieties. Chutneys may be either wet or dry, can have a coarse to a fine texture and can contain either fresh or pickled preparations. This little chutney is rockin’. The sweetness of the carrots, creamy smoothness of the coconut and tang of the lemon would make any mouth happy. Eat with some Dijon on toast, on the side of some grilled chicken or just spoon in your mouth.

In a fry pan, heat cooking oil and lightly brown the garlic, lemongrass and chilies.

Mix all ingredients in a bowl.